skip to main | skip to sidebar

So I've had a strange couple of days....

I have been back in the US since the first of July.
As the crispness of the experience begins to fuzz around the edges, the best way to describe my life is that I have had a strange couple of days.
I miss it.
The last couple of weeks in Hungary were really busy. I made new friends, who took me swimming in the Cave baths, I baked cookies for the remaining 18 of 22 classes, I travelled constantly with Tara for two weeks, I was spoiled to death by Jon and Franny, Tara and I went to a melon patch, chased both buses and cars waving,  I won a fire jumping competition, My buddies helped my re-cram my life into two suitcases and sadly I said goodbye.
I hate to say good-bye, because it means an end of something amazing.  Instead I prefer to say Hello.
Posted by Brieggy at 3:29 AM 4 comments:

I feel alternatively that I have just arrived, hot and sweaty into Ferihegy and that I have been here forever.
Things are both entirely similar and entirely different from late August and early September.
My kids are returning to the energetic state of chaos that surrounds new beginnings and endings. They still ask me if I am married, am I really 88, and other varied personal questions. Unlike in September I am no longer shocked by their curiosity.
In late May we went to another Wine festival in Etyek. Again Lauren, Lyla and I piled into the ancient yellow volan bus to trek the 45 minute journey. This time they did not meet me at the Bus station, and this time we knew where to go.
My music and Youtube education has grown thanks to Franny. I am learning new ideas about food from Jon. I am learning about physical presentation from Lauren and Lyla. I am learning Hungarian from Sani and Jeno. I am learning about fishing and wine from Tamas. I am learning patience and joy from my kids. I am learning to play Hungarian cards from 11b. I am learning about sewing, baking, traveling, dancing and BLISS in all its forms from the people around me.
I love being a teacher, because it means I never have to stop learning and pursuing knowledge.
I just hope I have taught my students something as well.
Posted by Brieggy at 4:54 PM 1 comment:

"Tomorrow there will be an execution"

Is what one of my teachers told me, as I looked around at people tacking colourful banners around the school. My confused face must have given it away, because he looked at me strangely as I asked "Exhibition?"
I have had a delightful week of company. First Tara in Mariapocs then later a friend from Australia I had not seen in years.
Tara and I accompanied the teachers on a wine "tasting" in a small town just over an hour away from Heves. On the way there we made a pit-stop to drink wine, at some one's house...just because, and when we got to Nagyrede, it started with obligatory shots of Palinka. The night was spent talking to a teacher who has not spoken a word to me in the last 9 months that I have lived here, listening to the Bandis sing songs, nattering in Hunglish, eating amazing food, and dancing to Hungarian jazz under the stars.
Judit, Tara and I popped into my favorite flower shop, where the man behind the counter gave us free yellow roses each "for our birthdays"
There was a fashion show in school, including dancing Snow white and the seven dwarfs.
Tara, Jamie, Jeb and I chilled in Gyula for two days. I ran into an acquaintance, whom I have not seen in two years, but still remembered who I was (despite no longer having black hair). Odd, and nice.
I saw a play in Eger with the Cops. It involved Alien ghosts, a fold out book, a gangster, a robot, a bomb, an overenthusiastic cop, a mean caretaker, plum dumplings, and a girl in a clown suit called Hedgehog (sunni)... AND it was a musical.
I gave someone a hair cut. It turned out cute.
One of my private 11b students taught me how to play Hungarian cards. When the rest of the class came in, more people joined, and I ended up skipping lunch to play cards with my students.
The Folk Art museum ladies recognize me, as I have now been there at least 5 times (taking the tour). Twice in the last week. Although never having taken the tour in English, I have been the translator almost all of those times, even though my Hungarian is pretty bad and I only figured out the word for linen on the third time around.
Posted by Brieggy at 8:44 PM 1 comment:

One way to go shopping.

I began to open the door into the teacher's snack lounge to spend time between lessons, when suddenly the door was slammed back and an angry voice yelled: "Csak lányok" (Only women). Two blue eyes peeked at me through the open crack of the door. Taking in my surprise, and that I am a girl, she shot off rapid fire Hungarian, and let me in quickly and closed the door behind me.
There in front of me stood one of the teachers half naked. She pulled on a shirt buttoned it up, and moved her arms in the familiar gestures of trying on clothing. Ignoring the shock of seeing one of my colleagues in such a state, I sifted through piles of shirts, track suits, and colourful pants. The teacher and the sales lady encouraged me to try something on, so I did.
There I was, middle of the room, about to try on a shirt when I realized while the door was blocked, the full length windows ground floor windows had only sheer curtains blocking us from the outside.
The windows look out to the entrance walk.
We had all of the lights on.
Well...that is one way to go shopping.
Posted by Brieggy at 2:42 PM 2 comments:

A wake up call.

There are less than 5 full weeks of school left.
My seniors have graduated, in a flurry of flowers and poetic ceremony.
I will be following their exits with my own búcsú in under two months.
I am not ready to leave this life of miscommunication and hilarity.
Posted by Brieggy at 7:46 PM 2 comments:

Labels: being spoiled, Thanks

The Thursday after spring break the No walked into 11d's classroom, to be greeted with a student jumping out of the sink closet and spritzing her with strong perfume. Shock, Surprise and Stink assailed all of her senses, forcing her to take a moment to re-group. It proves that even two days after locsolkodás, American teachers are not safe from fertility traditions.
The last few weeks the staff have been frantically prepping the 12th grade
students for their Maturity exams. This includes giving intense practice exams,
which they mostly failed. They have, however, led to some new favorite
Hunglish student-isms.
One of the Hungarian graduation traditions (unlike in the US,
graduation activities extend over at least a week) is called Serenade. It is exactly
what it sounds like. Students walk from teacher's house to teacher's house and sing
them songs. Both 12a and 12b are singing to me. The No is excited to see this
tradition up close, but would be more excited if it did not mean staying up
until after 2am. 12b is seranading her at 1am-ish.
Here is a quick guide to some important Hungarian terms for this post.
Locsolkodás: Easter Minda sprinkling, boys dash/sprinkle girls with water/perfume in exchange for money, eggs and palinka.
érettségi: Hungarian Maturity exam, think of a University entrance exam.
This is taken in the beginning of May for 12th grade, but can be taken earlier.
Seranade: Part of the Hungarian graduation traditions.
Posted by Brieggy at 8:37 PM 4 comments:

"Hey dude, I'm lost, I forgot where to go in the [town]" was how Easter Sunday should have started. I got off the bus in beautiful sunny Kalocsa at the wrong bus stop, and a short phone call to Franny later, I was headed in the right direction. Easter was delicious! Between Jon's AMAZING cooking and Franny's play list, Easter was lovely. We meandered the town, and dyed eggs with plants and onion skins. Franny and I were in charge of blowing the eggs out, so that we could dye just the shells. While the first one I did, to show Franny how to do it, worked perfectly, the next two I broke....finally culminating in an egg that defied physics and exploded up my nose. Too soon I was on the bus back to Budapest. 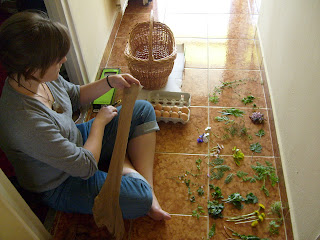 Prep work to dye the eggs 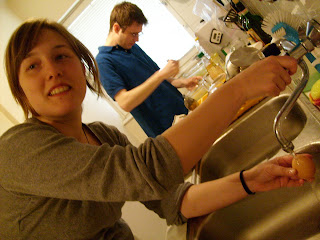 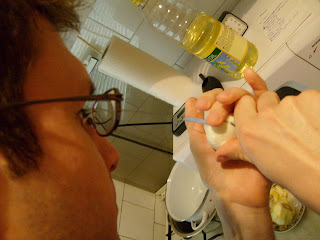 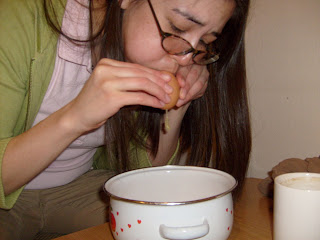 Franny blowing out the eggs 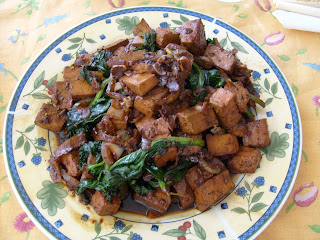 Holloko: I went to see the traditional Hungarian watering. I missed out on seeing a girl dressed in traditional dress getting doused with a bucket of water, but it was a good day nonetheless. 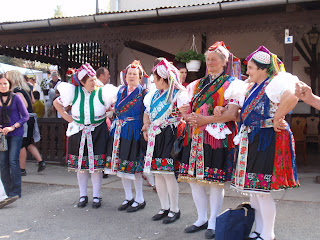 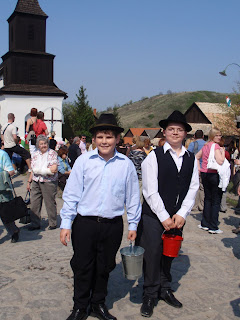 Kids who ran around splashing people
Posted by Brieggy at 3:19 PM 1 comment:

I met Jamie and Tara in Budapest and together we caught a late train to a former capital of the Hungarian territory...Bratislava. We slept poorly, meandered, and ate perogies. 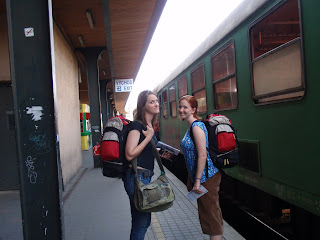 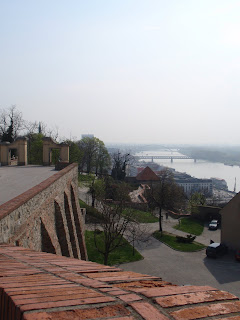 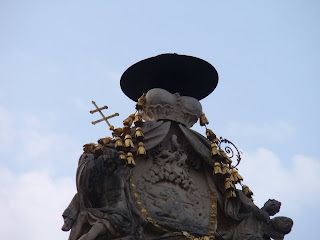 A hat on a building!

Brno, a name I can not properly pronounce, but was stunning! We explored, and visited one of the most famous prisons in the Hapsburg empire. There I drooled over Handschrift documents on display, and later we popped into the Easter market. All too soon it was time to wait for the train and travel on our separate ways.
Budapest: I finally checked out the shoe memorial along the Danube. The weather was perfect to just chill out on its banks. I also popped into the Easter Market at Vorosmarty ter, and chilled out sipping tea.
Posted by Brieggy at 7:44 AM 1 comment:

Stuff I may be reading

Brieggy
My hair is usually a mess.